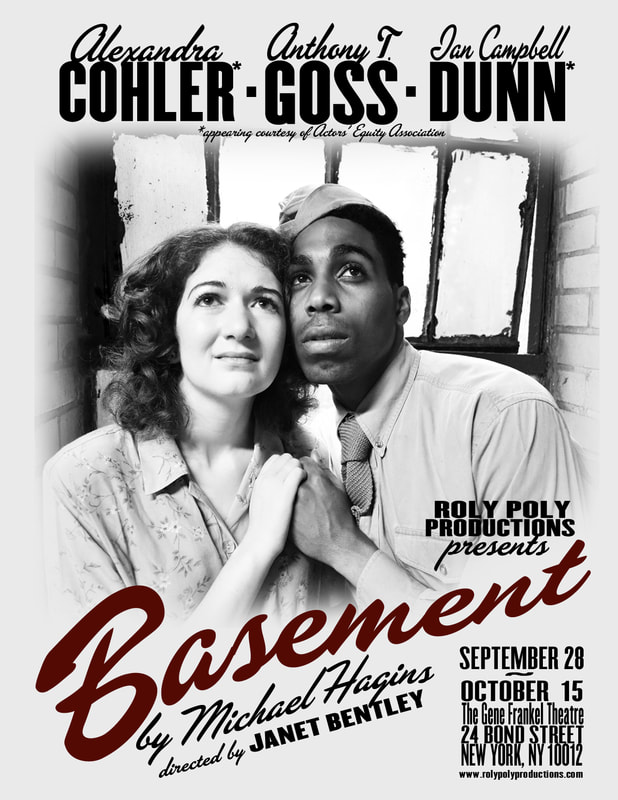 "Cohler and Goss have a great sensual and romantic chemistry that’s frequently exhibited, especially when they jitterbug and are later in bed together."

"As the unseen voice of the radio announcer, Ian Campbell Dunn marvelously and warmly replicates the cadences of such a figure of yesteryear with his breezy and stentorian delivery.  Mr. Dunn becomes a welcome and engaging figure as the play goes along."

"Besides guiding the young cast to their vivid characterizations, director Janet Bentley has also staged the play with visual variety and momentum.  This is quite a challenge as it’s basically two people in a room, and Ms. Bentley has succeeded in making it absorbing."
Click HERE for more!

Andrew Andrews at Opplaud.com writes:
"This is one of those shows with something for everyone: WWII drama, comedy, creative lighting effects (we've seen no better demonstration of the passing of time, thanks to “Lucky” Gilbert Pearto's moving shadows and Janet Mervin's many costume changes), creative sound effects (notice the record scratching over the radio, thanks to Andy Evan Cohen) and even a jazz dance or two (choreographed by Mary Baynard) that sends you straight back to the early 1940s."
Click HERE for more!

Ed Malin writes for Theatre In The Now:
"If French is the language of love, it is all the more a pleasure to watch our protagonists take baby steps and then spread their wings. The charming process of getting to know each other is convincingly directed by Janet Bentley."
CLICK HERE FOR MORE! 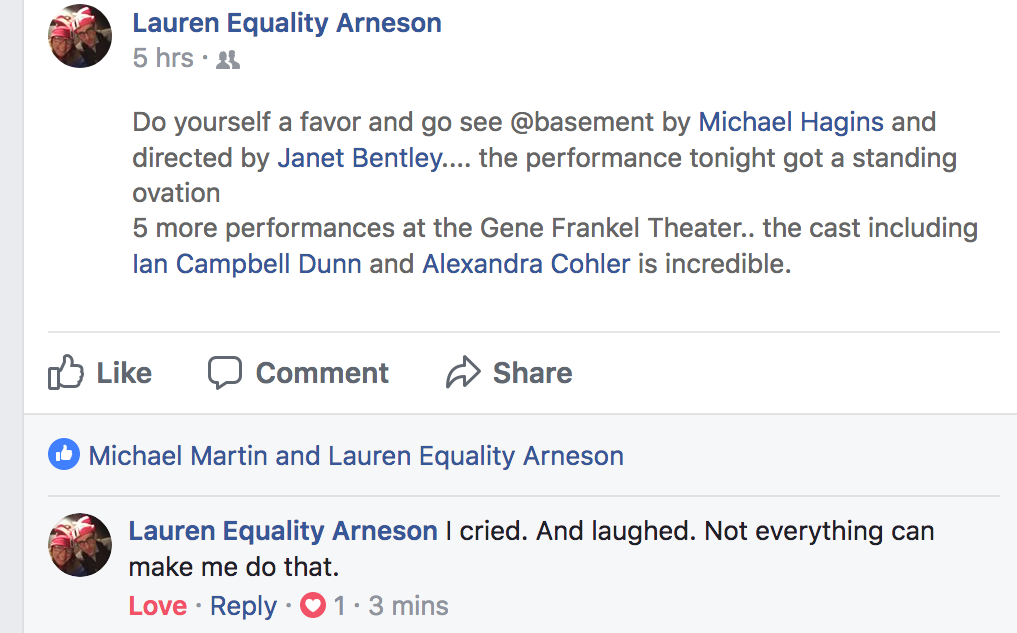 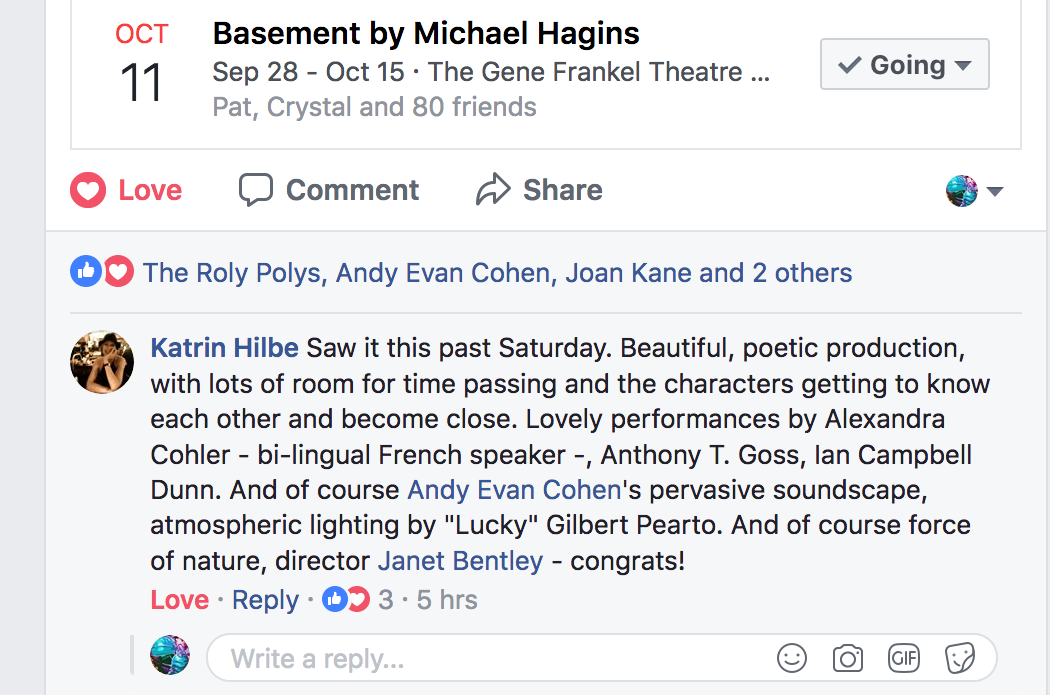 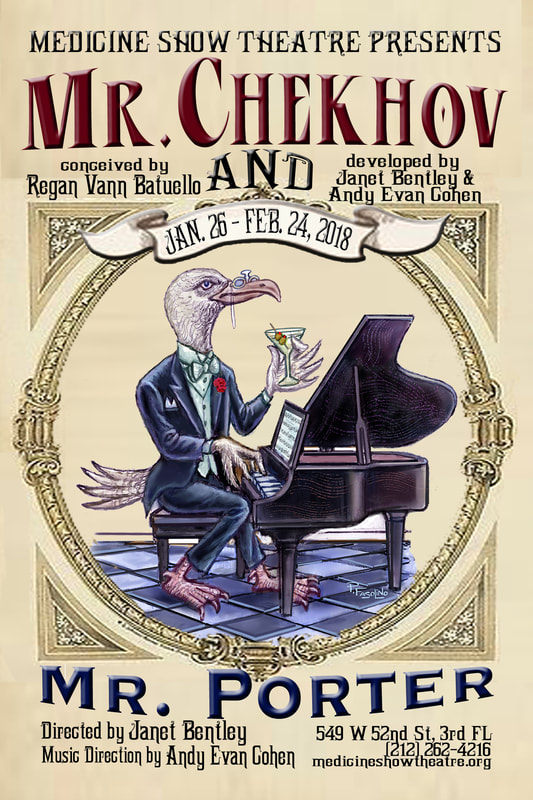 “Director Janet Bentley’s inspired staging has the cast of 12 creatively entering from all over the theater and scenes are performed in different areas as well.  There are several arresting production numbers that are aided by choreographer Madeline Jaye’s simple yet expressive dances.  Ms. Bentley crucially has actors conveying the right tone of the plays and songs.”

“Music director Andy Evan Cohen is off to the side lovingly playing his accomplished arrangements of Porter’s tunes at the piano. The black clad Mr. Cohen also comically appears drunkenly staggering around the stage as a Chekhovian figure.”

“Chekhov’s melancholy humor is perfectly matched with appropriate songs and so the overall effect is of a smart jukebox musical that honors both artists.”

“A beautifully painted horizon on view, a shimmering red curtain for Treplov’s play, columns shrouded in cloth and a doorway and porch strewn with leaves are elements of Bentley’s striking scenic design. She provides a landscape that atmospherically conjures up the world of Chekhov.”

“"The first act is a faithful and skillful hour-long condensation of The Seagull. The second act is a clever hour-long vaudeville-style amalgam of The Cherry Orchard, Uncle Vanya and The Three Sisters in the detailed manner of one of Mel Brooks’ cinematic parodies.”
Ed Malin at Theatre In The Now writes

“Janet Bentley has spent a lot of quality directing hours transforming this ensemble into so many characters in so many musical universes.  I must congratulate everyone for coming together to bring the world this new fusion show with all of its artistry.”

“Janet Bentley gets the credit for designing sets worthy of all four of Chekhov’s greatest hits.  While Act One had a spare set evocative of a theater (see: Seagull), Act Two shows us the gilded homestead of Madame Lyubov Andreievna Ranevskaya (Cynthia Shaw) and surrounding suggestions of whispering cherry trees.”

“There is a lot to enjoy in this production.”
Anthony J. Piccionne of onstageblog.com writes:

“Overall, the songs used for the show sync well with the stories being told in this production. There’s only so much you can do – in terms advancing the plot – by adding songs that originally weren’t intended for that particular story, but this show is successful at taking it as far as possible. It was easy for me to get some good, old-school Broadway (early-to-mid 20th century) vibes from this show, which I suspect is probably what these artists were hoping for.”

“The wonderful set design of Ms. Bentley gives one the impression that a future iteration of this show should be on a larger stage, even as the performance itself helps strike a good balance by preserving the lovely intimacy that often comes with indie theatre. Also enhancing the show’s visual aesthetic is the outstanding work of costume designer Janet Mervin, whose costumes do an equally fine job at capturing the time period that this show seems to be trying to capture.”
Proudly powered by Weebly